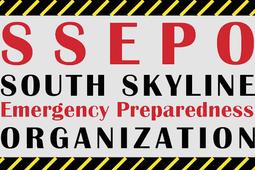 ​We have all become accustomed to easy communication:  telephones, cell phones, the internet, iPads and all kinds of wireless contraptions.  However, in large-scale disasters, the normal methods of communication are likely to be unavailable, including the telephone or cable based internet.  South Skyline residents live in a remote location, which is likely to be cut-off from our urban neighbors during a disaster.  It may be days, or even weeks, before emergency services can get to us or to restore normal communication.  So, how do we communicate our needs to the outside world to facilitate rescue efforts?  The answer to this is radio. There are two approaches to this:  low power GMRS radios at the neighborhood level, and HAM radio which will let you communicate under most any circumstances.

Amateur radio operators INVENTED wireless communications and were a 100 years ahead of the cell phone.  HAM Radios are two-way transceivers.  Depending on the radio, the antenna and the band being used, HAM Radios have the capability of communicating around the world and even to outer space.  To operate a HAM Radio, you must have at least a “Technician” license, which requires the user to pass a written test.  FCC regulations relating to the use of Ham Radios are strongly enforced.

An effective way of communicating within a neighborhood is by using General Mobile Radio Service (GMRS) Radios.  These are also two-way transceivers, but a written test is not required of the user and the range is very limited, but effective within most of our neighborhoods in the South Skyline Area. A regulatory fee with the FCC is no longer required, but it is necessary to submit an application fee to use GMRS Radios.  A GMRS repeater has been installed in the Portola Heights community which allows us to communicate across many of our South Skyline neighborhoods.  To communicate across all our neighborhoods or to communities many miles away, a HAM Radio is necessary.  HAM Radios now have the capability of digital operation and “winlink” internet connections, even when traditional internet is down.

The Amateur Radio Emergency Service (ARES) consists of licensed amateur radio operators who have voluntarily registered their qualifications and equipment for communications duty in the public interest when disaster strikes.  There are three levels of ARES organization and leadership.  In our area, the Section Manager is responsible for 5 counties within the Bay Area:  San Mateo, Santa Clara, Santa Cruz, Benito and Monterey.  The District Manager is responsible for a specific county, or in our case, San Mateo is divided into Bay Side and Coastside.  The South Skyline Area has an ARES Emergency Coordinator (EC) who reports to the Coastside District Manager.

When a disaster situation arises, EC’s in disaster areas determine the communication needs of the area.  The South Skyline Emergency Communications Band Plan specifies the bands and frequencies that are most likely to be responsive to our issues during an emergency.  The Skyline EC, or other specified Ham Operator, would receive information from Ham Operators within the neighborhoods in the South Skyline area regarding the assessment of damage caused by the disaster.  This person would then report that information, along with requests for emergency services, to the Emergency Operation Center (EOC), who would then pass the information to Incident Command and/or the Office of Emergency Services (OES).

HAM operators play a vital role in obtaining the required emergency services during a disaster.  And, it’s also a lot of fun to play with radios!  For more information about HAM Radio, go to www.SC4ARC.org and if you are interested in becoming a HAM operator or want to GET INVOLVED with the South Skyline ARES group, contact info@SSEPO.org.